Rubber Gloves and Free Finger Cots:
I reuse my rubber gloves (nitrile or latex) until they leak. I just turn them inside out while removing them and then rinse the "inside" (now outside) and hang them to dry. When needed again, turn them right side in and blow to push out the fingers. But once they leak, cut off the good fingers to use as non-sterile finger cots and dispose the rest. These finger cots are useful for keeping a finger bandage dry (just pull it on over your bandage before washing or before messy finger-jobs (like spreading glue or paint). To avoid splitting the cots, fold the cut edge over before wearing. Once on a finger, you can often roll the cot up to easily remove and re-install as shown below: 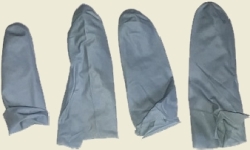 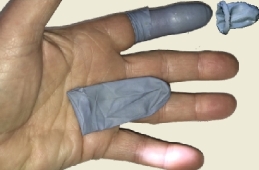